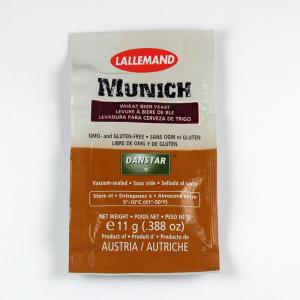 Product Code: 132
Availability: Out Of Stock
Shipping Info: Eligible for Flat Rate Shipping!
Out of Stock
Add to Wish List
Add to Compare

Munich Wheat Beer yeast originated in Bavaria, German and is a neutral strain which can be used to produce a wide variety of wheat-based beer styles. With only slight esters and phenol production, Munich’s allows brewers to showcase other spice additions. Traditional styles brewed with this yeast include but are not limited to American Wheat, Belgian White, Berliner Weiss, Gose, Hefeweizen, Dunkelweis, and Weizenbock. In classic open fermentation vessels, the yeast can be skimmed off the top. Some settling can be promoted by cooling and use of fining agents and isinglass. Aroma is estery to both palate and nose with typical banana notes. Does not display malodours when properly handled. Munich yeast is best used at traditional ale temperatures after rehydration in the recommended manner. Quick start and vigorous fermentation, which can be completed in 4 days above 17°C. 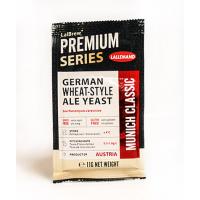